Is the OXE Diesel outboard the future?

Swedish company Cimco Marine has developed the world’s first 200hp diesel marine outboard – named the OXE Diesel – in a move that could prove highly interesting for superyachts. Being able to fill your tender’s outboard direct from the main tanks not only simplifies the refuelling process, it also eliminates the need for carrying petrol and the associated safety equipment. It raises an obvious question – why were there no large diesel outboards on the market before now?

“The challenge,” says Jamie Clarke of Supacat, parent company to marine distributor Proteum, “has always been getting the right engine and the right packaging. A diesel engine with similar performance to a petrol version tends to be a lot more bulky and a lot harder to marinise. The clever bit with the OXE Diesel outboard has been getting the right size engine into an outboard style of delivery that can deliver the performance you need.”

The OXE Diesel includes a handful of innovations. First, it uses a belt drive system instead of gear linkages to transfer power from the engine unit to the propeller. This, in turn, means that the engine itself can be mounted at 90 degrees to that of a standard outboard, which means that a less specialist diesel engine can be used (see exploded view below). The result is an outboard unit of similar size and dimensions to a conventional two- or four-stroke petrol outboard for the same power output, the only slight drawbacks being slightly reduced performance off the line and a slightly reduced throttle response. 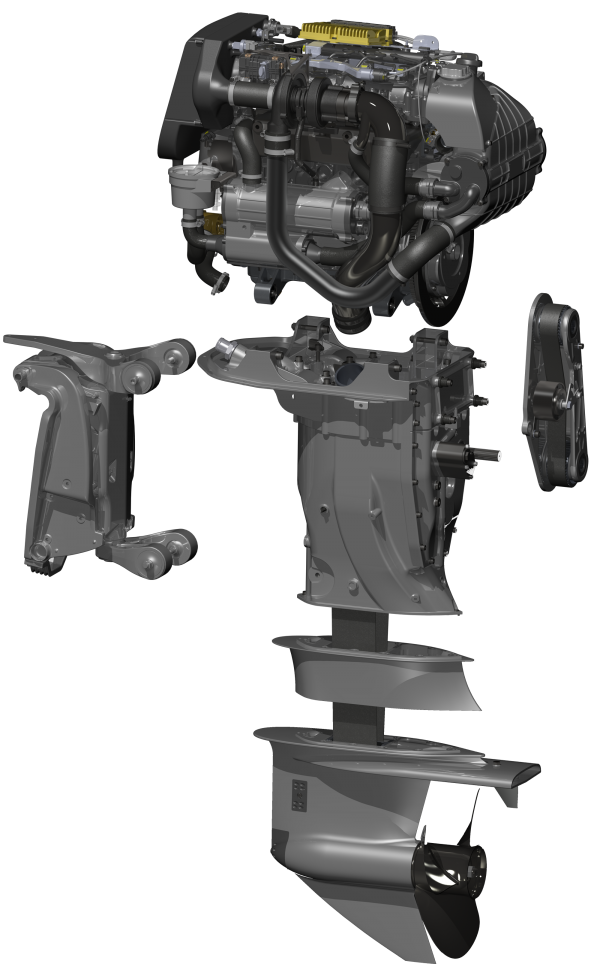 However, the advantages are plain to see. Not only does it negate the need for carrying petrol – and therefore complying with the concomitant safety requirements – but also running costs, available range and service intervals are all improved. Cimco cites comparative figures for fuel consumption at wide-open throttle of 43l/h for the OXE Diesel 200hp outboard against 71l/h and 73l/h respectively for equivalent 200hp four-stroke and two-stroke petrol outboards. The net result is that for the same performance and tank size the OXE Diesel four-stroke offers 70 per cent more range – perfect for exploratory trips away from the mother ship.

The advantages could also translate into operational lifecycle costs. While the unit price will be higher than the equivalent outboard (prices are still to be confirmed), the costs over the operational lifecycle are expected to be much lower. In standard commercial usage, the crossover for outlay and accumulated costs between the OXE engine and a petrol version should be around seven months. “After four years,” adds Clarke, “we think you would have spent five times more in lifecycle costs with a petrol outboard.” 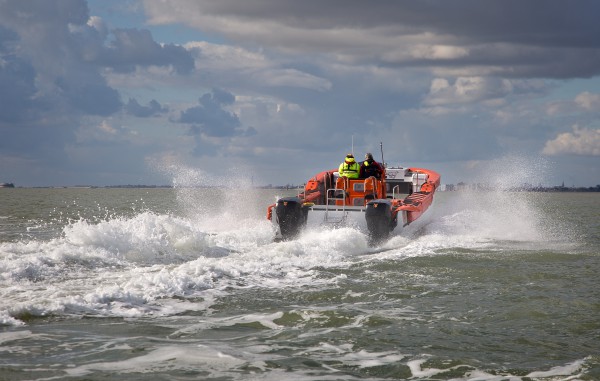 With roughly equivalent dimensions – albeit with a higher weight – the OXE Diesel 200hp should also offer broadly similar performance to the petrol equivalent. “We’ve got a twin installation on a 10m Cheetah cat,” says Jeremy Paul, general manager of Proteum and distributor for the UK, Ireland and Channel Islands. “That’s a heavy boat, but we’re getting around 30 knots. Cimco have a demo boat in Sweden with a sleeker hull and a single engine that does around 45 knots.”

The outboard is suitable for a broad range of applications, and so far Proteum has registered interest from a diverse range of clients. “There’s a river taxi in Portugal that is using the engines,” says Paul, “and we’ve had a surprising number of enquiries from heavy workboats. But we’re also working on an OXE-powered Scorpion RIB for Necker Island. Basically, anywhere you’d use a 200hp outboard, the OXE Diesel is a direct replacement. It uses the same mounting as a Yamaha 200hp outboard, and the prop uses the same spline and shaft too.”

The 200hp OXE Diesel is expected to go into full production at the start of the summer, and units should be available to buy from July 2016. Further, Cimco Marine is planning to expand the range, with a variety of new units offering up to 400hp currently in development.